Bishop Fellay Gives Lecture in Michigan, USA on the State of the Society

Conference by Bishop Fellay on status of SSPX 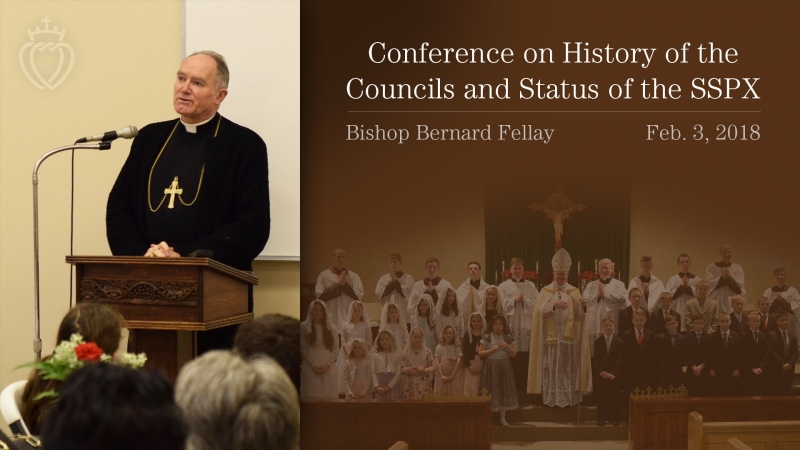 Bishop Bernard Fellay, General Superior of the Society of St. Pius X, graciously agreed to give a conference to the faithful of St. Joseph’s Church, in which he spoke of the development of the Society’s relations with Rome. During the course of the evening, that of February 3, 2018, he gave a healthy dose of background information, and an even healthier dose of encouragement and enlightenment on a topic which can appear so dark to Catholics today.

In front of an interested crowd of faithful from St. Joseph’s, Bishop Fellay began the conference by sketching an interesting back-history of the work of the SSPX, calling to mind events and movements that transpired before the Second Vatican Council. He recalled the “human respect” that churchmen fell into, which caused them to avoid a condemnation of Communism and to introduce the poisonous concept of Religious Liberty. This last, it was remarked, was specifically asked of the Church by the Freemasonic B’nai B’rith lodge.

The influence of Communism and Freemasonry did not end at the Council, however, but ravaged the Church extensively in the decades after. The enemies of Christ attacked the heart of His Church by bringing their guns to bear on the priesthood. By planting hand-picked candidates in the seminaries, these enemies managed to reduce the body of priests to a skeleton of its former self in a matter of a few decades. For example, His Excellency noted, there is a parish in France that has two priests, both over sixty years of age, that have been given the care of ninety-two Mass centers. It’s a situation that is truly dramatic, and there is certainly no improvement at this time.

In a few brush-strokes the bishop then painted a brief summary of the Society’s dealings with Rome from its founding in 1970. Among other things, he spoke of the protocol of 1988 – a document which was not perfect but was sufficient in itself, and would have granted the Society its rightful place within the Church. The Archbishop retracted his signature from this document for a practical reason; after prayer he realized that he likely was being fooled, and would not be given a successor.

He mentioned the doctrinal talks of 2009-2011, which showed Rome that the SSPX believes nothing heretical and that modern Catholic teaching on certain points stands in stark contrast to the traditional doctrine of the Church.

Subsequently, pointed out the bishop, there followed many contradictory communications with Rome. Among these, the Society was given a document stating conditions for regularization which which for the Society were unacceptable. Soon after receiving this, the General Superior was told by trustworthy sources close to the then-Pope Benedict, that these conditions were not the will of the pope. It was clear that there were influential men in the Vatican that were effectively blocking the work of the Pope.

More or less, that is where things stand now. A cardinal told Bishop Fellay something that gives a simple explanation to our present problem: “Speaking of the Roman Curia, the system is corrupt.” This statement is disheartening, and might lead anyone with a love for Christ’s Church to be discouraged. This reaction may happen, says the bishop, but it is without foundation. Here we will let him explain in his own words.

There are certain dangers; one danger is discouragement. But no, God allows these things to happen; we must not be discouraged. It just means that it is a long fight. We must continue peacefully; we do what we do, we continue Tradition, we see the fruits, and these fruits speak for themselves.

Another danger is to be ‘fed up’, saying, ‘We should have nothing to do with these people, that’s it, enough. But this is dangerous. We are not talking about a human organization when we speak of the Catholic Church; it’s the Church founded by Our Lord Jesus Christ which has the promise of divine assistance. We know there are many things which are totally wrong, which are putting people in despair, in confusion, and that’s terrible for souls. Nevertheless, we must maintain that this Church is the Catholic Church. There are many things happening in it that are bad - we reject them, we don’t want them. But we do not reject the Church.

The bishop then proceeded to explain that the trials we have in the Church are very similar to the trials of the Apostles at the foot of the cross. He pointed out that although Peter declared his faith in Christ’s divinity by a public profession, he reacted when Christ told him of His death. This could not happen if Christ is God, thought Peter.

Let’s ask the Apostles and the Blessed Virgin Mary to make an act of faith, to keep the right attitude in front of Jesus suffering on the cross. We have to understand that when we see Jesus on the cross we see God. When the Blessed Virgin Mary received Jesus in her arms after His death, she could talk to the living God, because God had not abandoned this most precious Body. The body was dead, but it remained united to the Godhead. Jesus as God was there.

The Church is not yet totally dead; the living God is in it. And we are part of this Church.

It is a very deep trial. I may say it’s probably the deepest [the Church] has ever had. That’s why we have priests that call themselves the Resistance, or even sedevacantists: they are so fixated on the reality of the sufferings of the Church that they run away.

We reject what is wrong, but we don’t reject the Church.

The time we live in is a very, very dangerous one. As I tell you, it is the temptation of the Apostles in the Passion. You know how many of the Apostles remained faithful. Almost all of them ran away. That’s why we cannot pretend to be better than them. We must ask for the grace to be faithful.

An audio file of the entire conference (2 hours, 30 minutes) is available for download here.